After my fall, I was lifted up by the grace of presence itself. Yet I recognize this lifting up as something we must do daily to stay awake to the gifts we are given.

There is no way to come up the well but the dark way.  We blow it, in big ways and small, and we suffer real consequences. We need examine our failings and our fears and then let them go.  May all of us, you and I, be a bucket full of lessons, overflowing with wisdom and love.

Click here to read more of Deborah’s articles about psychotherapy and healing.

Click here to learn about the Journey of the Feminine retreat in Costa Rica.

The awakened woman emerges from the chrysalis of her own inner resources.  She is established in freedom, she manifests her freedom in the celebration of her interconnectedness with all of life.

These dancers are practicing a sequence of a dance routine at Colorado University. I used this photo from a class I took on photography to illustrate an idea of letting go in a TedxBoulder talk I gave last week.  Here is a brief quote from the talk:

We need examine our failings and our fears and then let them go.  May all of us, you and I, be a bucket full of lessons, overflowing with wisdom and love.

Christina’s quote seems to also illustrate the freedom, interconnectedness and celebration of the dancer in trusting the process of letting go!

The link to my Tedx talk should be available soon.  I can’t wait to send it to you! 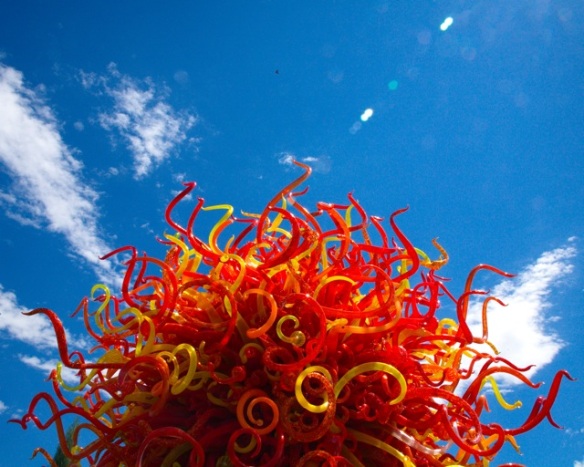 However, limitless equanimity, free of any prejudice at all, is not the same as an ultimate harmony where everything is finally smooth.  It is more a matter of being fully engaged with whatever comes to our door.  We could call it being completely alive.

This delightful sculpture, by Dale Chihuly, reminds me of being completely alive.  If it came to my door I would imagine feeling completely alive with fear or uncontrollable laughter.  Against the bright blue sky its orange tentacles seem to me like a sea creature or a tangle of crazy snakes on a red haired Medusa.

Pema Chodron suggests equanimity means we are ready for whatever comes to our door, Bozo the clown or a goddess that could turn us to stone. How do we graciously greet the vast diversity of life in all it’s shapes and colors and forms? Equanimity implies we see it equally and free of preconceived ideas.

How can we appreciate the wild display of life? See the harmony in the seeming squiggles and swirls? If you blow up this snapshot you will see a barn swallow flying high above Chihuly’s three dimensional glass form.  Like a bird, how can we hold a perspective that is both far and close, wide-angle and telescopic?

If you have the opportunity, see Chihuly’s work currently at the Denver Botanical Gardens where I took these photos.  It’s a safe space to wonder at the display of life entangled with life! 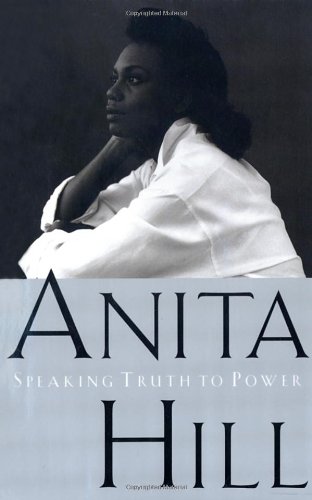 We must all understand that there is great merit in sacrificing for others and that by so doing we live the full life.

Aung San Suu Kyi is considered a bodhisattva in her country.  I would consider Anita a bodhisattva in the USA.  Both have led full lives of compassionate giving.  Below is my book review of Hill’s book from goodreads.

Anita Hill tells her story with courage and heart. Her incise arguments to every sexist and racist claim made against her had me riveted. Her stories were both moving and offered insight into several generations of an African-American family meeting degradation with strength and unrelenting dignity. The recent documentary film, Anita, is a great compliment to her writing and helps us understand the tenor of the Hill-Thomas hearing of 1991 by the power of it’s visual impact. We also have the opportunity to see the continuation of her impactful work against sexual harassment two decades after the event. Although the book was published in 1998, I found it vital in describing a historical event, Anita Hill speaking truth to power, that has changed the lives of women worldwide.

Therefore, the practice of generosity is about creating space.  We see our limits and we extend them continuously and consciously, joyfully, which creates an expansiveness and spaciousness of mind that’s deeply composed. 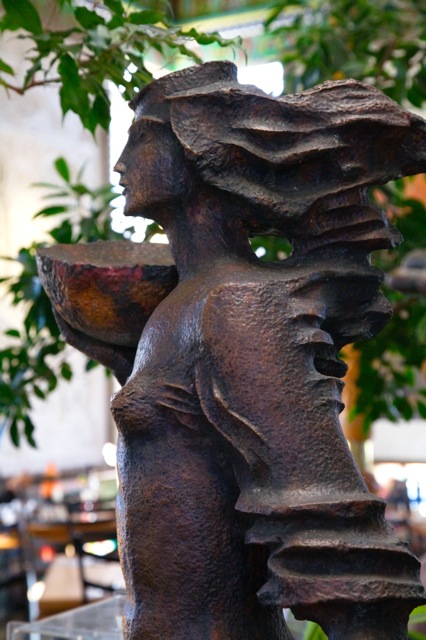 These are two of my favorite photographs of the sculptures at the Dushanbe Tea House in Boulder, Colorado.  The light is constantly changing as are the lovely plants surrounding the figures of the seven beauties.  They remind me of a spacious and joyous mind that is deeply composed and in the world.

To see some of my other photos go to thefemalebuddha.com or luminousbuddha.com 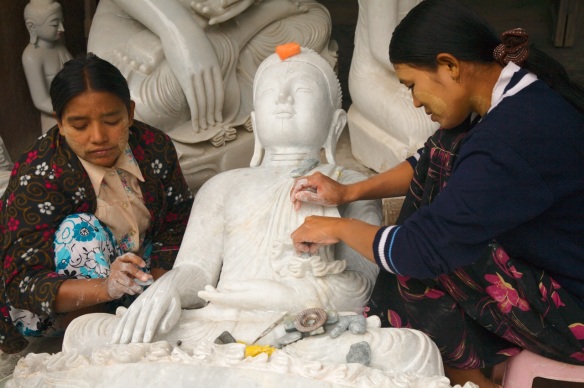 Therefore, the practice of generosity is about creating space.  We see our limits and we extend them continuously and consciously, joyfully, which creates an expansiveness and spaciousness of mind that’s deeply composed.

On one side of this narrow road in Mandalay men used power tools and chisels to carve the forms of many Buddhas and on the other side of the road women refined the figures by shaping the details and polishing the stone.  I was drawn to the gentle touch and concentration of these women.  They appeared generous in spirit and deeply composed like the Buddhas they were creating.

TEMPLES OF SOUTH AND EAST ASIA: DISCOVERING THE SUBLIME IN A PHOTO

Join Deborah Bowman in a search of the transcendent at temple sites in Asia.  Enjoy the draw of both famous and obscure sites at times of silence or among throngs at colorful festivals.   Come now to enjoy a feast of Buddhas and Bodhisattvas or learn tips for great shots at exquisite gardens or inside darkened temples.

Because reality is seen as dependently co-arising, or systemic in nature, each and every act is understood to have an effect on the larger web of life, and the process of development is perceived as being multidimensional.  One’s personal awakening (purshodaya) is integral to the awakening of one’s village (granodaya), and both play integral roles in deshodaya and vishodaya, the awakening of one’s country and one’s world.

Joanna’s words seem an apt compliment to this photo of Buddhas from a temple in Laos. During the “secret” bombing of Laos by the United States in the Vietnam War the town of Luang Prabang was considered the spiritual capital of Laos and was not struck.  Villagers and monks from the surrounding towns brought Buddha statues and other sacred relics to be stored for safety in temples in Luang Prabang.

When we visited several years ago sacred wooden statues were stacked many deep in Wat Winsunalat and the opportunity to photograph “relationships” between the Buddhas was impossible to pass up.  The foreground figure in the photo above seems to capture the mind of the Buddha, peaceful no matter who is looking on.

I was thankful to be able to salvage a little beauty in a photo out of the results of a terrible war.  These Buddhas appear to timelessly stand for teachings of wisdom and compassion passed down for over 2500 years.

The morning I discovered the many standing Buddhas stored in a temple in Laos I felt ecstatic.  Sunlight streamed through the windows and reflected off the golden figures draped in orange cloth.  They were glowing strength!”

The Female Buddha: Words and Images of Wisdom

Poetry suggests what prose cannot convey: the sublime and transcendent.  We will look at quotes in The Female Buddha that open “doors of perception” including Niguma’s reference to the mind as a “wish fulfilling jewel”, the words of enlightened women at the time of the Buddha, the haiku of Chiyo-ni and modern day reflections by women teachers.

Paired with the quotes are moving photographs of Guanyin temples and statuary throughout Asia. We will explore the historical meaning of her vibrant presence across time and place and trace her spiritual influence to our lives today.

Deborah Bowman, Ph.D., is a psychologist, photographer and professor at Naropa University where she founded the Transpersonal Counseling Psychology Program and the Wilderness Therapy program.  For 25 years, she has worked as a Gestalt and Jungian oriented psychotherapist. Passion for Guanyin guided her travels in Taiwan, Vietnam, Thailand, Korea, Japan, Cambodia, China and Myanmar. She is author of The Luminous Buddha and The Female Buddha: Discovering the Heart of Liberation and Love.

For those whom there is no hoarding,

Who have fully understood the nature of food,

And whose pasture is freedom

Their course is as hard to trace

As that of birds in the sky.

The Buddha ~ The Dhammapada

The quote by the Buddha refers to the quality of freedom experienced by the enlightened, leaving no trace like a bird in the sky.  Empty of any “baggage”, the sages freedom is without the things we hoard and the desires that drive our clinging to the material world.  We can understand this metaphor to also refer to all hoarding; of our past wounds, of our future expectations and ultimately, our sense of self.  Freedom is liberation of the heart and mind, an experience aptly described by the flight of a bird in the clean, bright, open blue sky.

Two years ago we had the delight to visit Shwedagon temple in Rangoon with many  outdoor altars and many golden Buddhas.  Pilgrims left plates of rice offerings and the crows kept the offerings fresh by waiting on top of a Buddha’s head and regularly cleaning the plates.  I found the juxtaposition of the many Buddhas and   crows delightful.  At home when reviewing my photos I found more crows in the shots than I remembered! Can you find them too?

When looking for images to offer for the holiday season I found myself drawn to these photographs and wanted to offer something playful and rich.  May you delight in this season of renewal and freedom.

Still on sale through Amazon!  Last day to ship for Christmas! 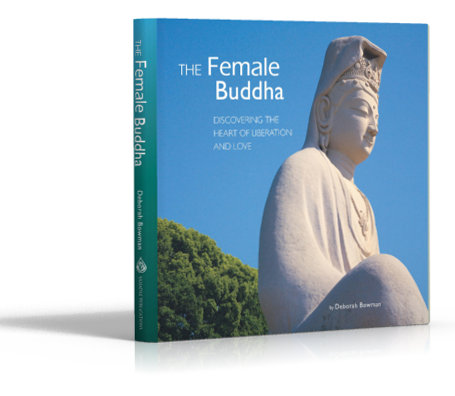 I’ll be changing into

But my heart is

The color of spring blossoms.

When we extend attention and appreciation toward our environment and other people, our experience of joy gets even bigger.

I took this photo last weekend at the Cherry Blossom Festival in Denver. I highly recommend this yearly event with musical performances, martial arts demonstrations and lots of great booths with kimonos, dolls and t-shirts with rich japanese paintings.

The Female Buddha book on sale at Amazon!