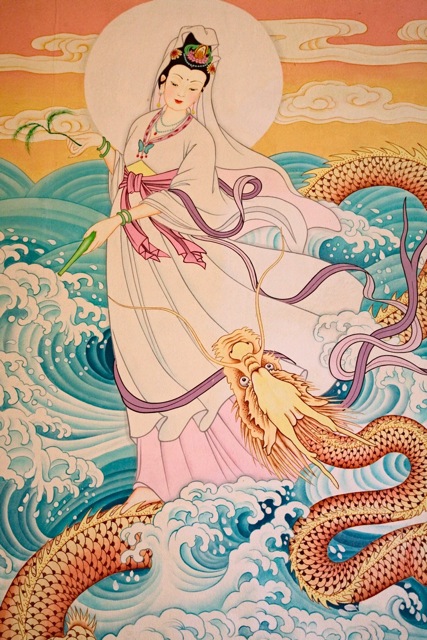 When I first starting looking for images of Guanyin in Bangkok I headed out to Chinatown.  Like many of our big cities in the United States, Chinatowns may be found throughout the world.  The large cities and coastal town of East Asia were particularly popular for  immigrants when times were hard or there was political repression in China.

The Chinese practiced a form of Buddhism giving devotion to Guanyin and brought many images of the her to the shores of Bangkok where only images of the original Buddha are found.  I discovered the mural above adorning the walls of an outdoor temple amidst a busy street in the heart of Chinatown.

Guanyin has a willow branch in one hand displaying her gentle nature and a vase pouring healing nectar in the other hand.  She rides the back of a dragon on ocean waves with confidence and command.  She is known as the one who hears the cries of the world.

This outdoor temple was part of a Charity Medical Center sponsored by a Buddhist association.  When I went to the door I was asked if I needed medical attention and was touched by their generosity. 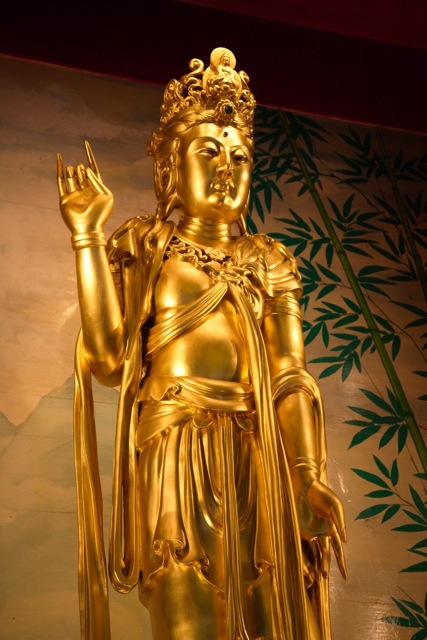 At the back of the temple was this life size statue of Guanyin in the male form.  When Buddhism came to China in the 2nd century Guanyin was known by his Indian name, Avelokitasvara.  By the 8th century many depictions were painted and sculpted as  female. Today you will see statues in East Asia that are male, female or androgynous.

I discovered this last image of Guanyin at the back of another temple that was closed for the day.  As you can see many individuals leave sweet and kitschy items to honor her presence.  In the next post I will share more of my photos of the feminine Guanyin found throughout the temples of Bangkok.

For additional inspirational images and quotes go to : www.thefemalebuddha.com  and www.luminousbuddha.com

1 thought on “The Generosity of Guanyin in Bangkok’s Chinatown”